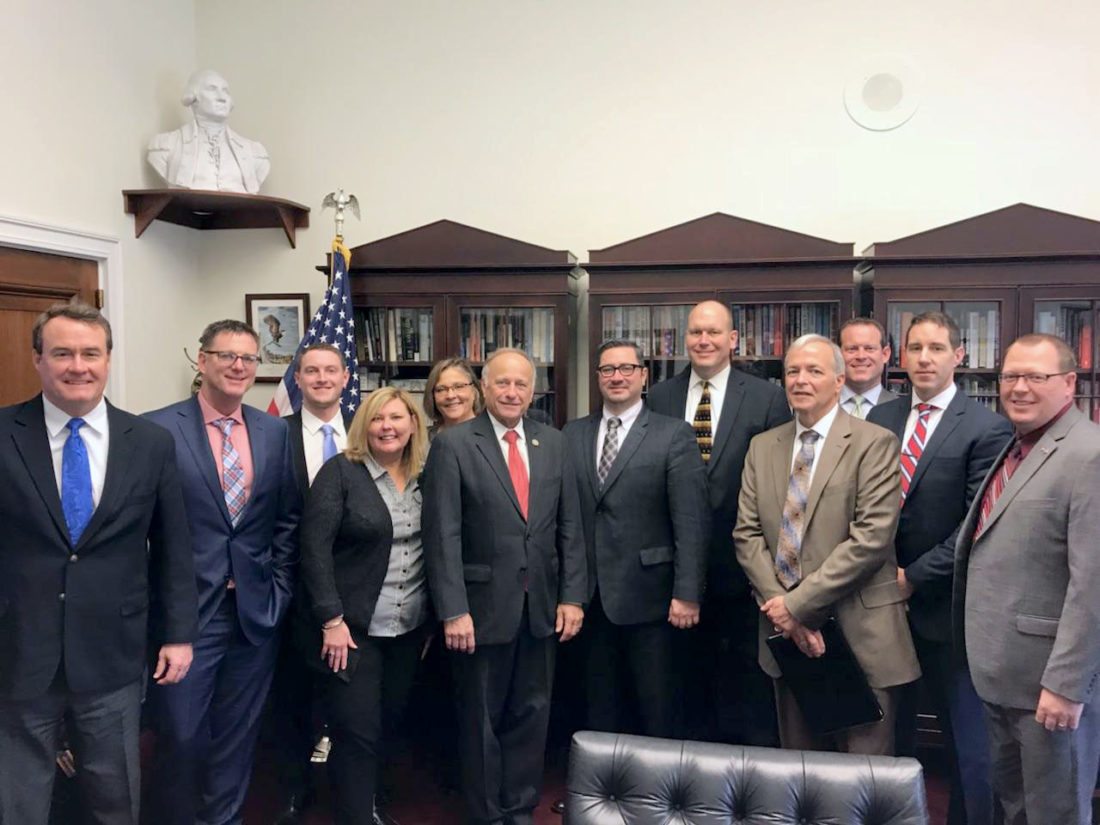 Future plans for the Des Moines River corridor in Fort Dodge were a frequent topic of discussion in Washington, D.C., Thursday as local leaders spent a second day lobbying in the nation’s capital.

The river was a prime discussion topic during sessions with the Army Corps of Engineers and U.S. Rep. Steve King, R-Kiron.

King, whose district includes Webster County, spent 45 minutes with the local group, and his staff spent another half hour with the delegation.

“We’ve got a very good relationship with him and his staff,” Fort Dodge City Councilman Terry Moehnke said.

“It was a very productive trip,” he added. “We did a great job of reaching out to people.”

In addition to meeting with federal officials, some of the local representatives visited the embassy of Kosovo. Fort Dodge is a sister city to Gjakova, a community in that Balkan country.

Most of the snow that forced the cancellation of the greater part of the local group’s meetings on Wednesday melted on Thursday.

Thursday’s agenda started with a meeting with representatives of the Army Corps of Engineers. Fort Dodge City Manager David Fierke said the planned removal of the two dams on the Des Moines River and the future redevelopment of the river corridor were the subjects of that meeting.

Then it was on to King’s office. The congressman was especially interested in the riverfront, Fort Dodge Regional Airport and the renovation of the Warden Plaza and the creation of a cultural and recreation center next to it.

“He’s been working hard to help us find funding for that one,” Fierke said of the Warden Plaza project.

The group met with one representative of the United States Department of Agriculture who came to its hotel on Wednesday. On Thursday, there was another meeting with USDA officials. Market on Central was a topic during that session.

Mar 23 2018
Joe Sutter Garbage never goes away — and the landfill south of Fort Dodge is building once again to ensure there’s a safe place to tuck it away. A new cell to hold the region’s trash will be built after the board approved a contract at the North Central Iowa Regional Soli...Continue Reading

Mar 22 2018
Bill Shea Local officials visiting Washington, D.C., had what one called “good meetings” with U.S. senators Joni Ernst and Charles Grassley on Wednesday. But much of the local delegation’s agenda was scrapped the same day due to the winter storm pounding the East Coast. A group of about 17 representatives from Fort Dodge...Continue Reading

FD, Webster County projects to be showcased in Washington

Mar 18 2018
BILL SHEA Some members of Congress and other federal officials are about to get a crash course on what’s going on in Fort Dodge and Webster County. That education will be courtesy of a 17-member local delegation that will travel to Washington, D.C., this week for an annual lobbying trip. During their tim...Continue Reading