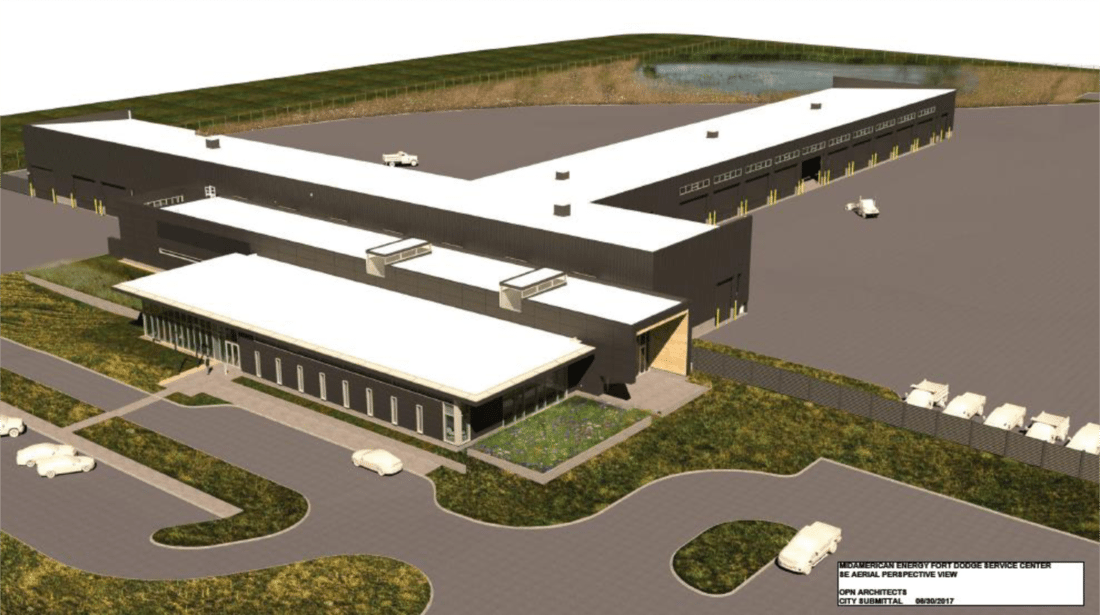 -Submitted graphic This artist’s rendering submitted to the Fort Dodge Board of Adjustment shows the proposed MidAmerican Energy Fort Dodge Service Center, to be located at 4000 First Ave. N. This is the first facility planned for the new Crosstown Industrial Park north of Decker Trucking.

A new MidAmerican Energy Co. facility will be one of the first buildings moving into the Decker Industrial Park on the east side of town.

Targeted completion date is the second quarter of 2018, Jacobi said.

“It will replace our existing facilities in Fort Dodge and will better serve the needs of our customers and our employees in the area,” he said.

The proposed building will have a footprint of more than 72,000 square feet, according to plans filed with the Fort Dodge Board of Adjustment.

It will be built on a 20-acre lot in the industrial park which was completed in December 2016, and which currently has only corn standing in the ready-for-development industrial lots.

The sign at the entrance indicates three lots have already been sold.

Plans for the park were announced in January 2014.

MidAmerican announced tentative plans to move there in September 2016.

Jul 30 2017
Joe Sutter After about a year of work, a $1.6 million expansion project is complete at the Community Health Center of Fort Dodge. The clinic at 126 N 10th St. has doubled its number of dental labs and nearly doubled the number of medical exam rooms, to better serve an increasing need. “W...Continue Reading

Jul 28 2017
Peter Kaspari A new Fort Dodge business is providing an opportunity for people to get fit with a monthly run/walk. Fit This, which opened in April at 1208 First Ave. S., hosts the free run/walk on the first Saturday of the month. The second walk will be held on Aug. 5. Amanda Bush, owne...Continue Reading