Plans for the Warden, cultural and rec center advance 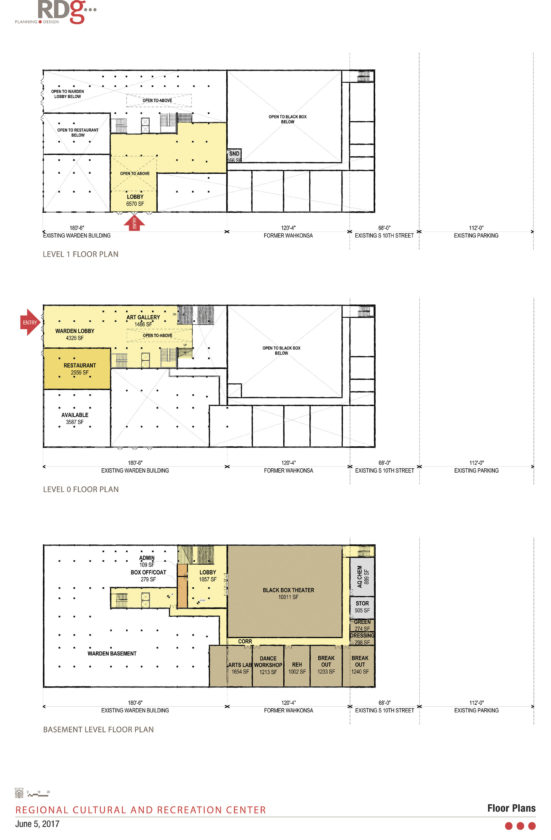 It’s dark, dusty and vacant now, but someday the Warden Plaza in downtown Fort Dodge may be home to hundreds of people.

Those residents might be able to leave their upstairs apartments to go shopping in stores on the building’s first floor. Or they could go right next door to see a play or take a swim in a new cultural and recreation center.

All that would be possible under an ambitious plan gradually taking shape.

That plan may include closing part of South 10th Street. And it may include building a parking ramp nearby.

But even as they begin to show off drawings of what the cultural and recreation center may look like, key organizers of the project are cautioning that much remains to be done and lots of things can change.

“This project is a catalyst for the community,” said Matt Brown, the president of Formation Group Inc., a Des Moines firm hired by the City Council to serve as the project’s manager.

Still, Brown is impressed by the way Fort Dodge residents have reacted to the proposal so far.

“This is probably the most cohesive community, around the project, that I have seen,” he said. “People in Fort Dodge want this and they know to get it they have to work together.”

"This is repurposing that dilapidated asset and putting new life into it,” Mayor Matt Bemrich said. “I’d rather breathe life into it than tear it down.”

He said the restoration of the Warden Plaza and the creation of the cultural and recreation center are separate but intertwined projects that will be paid for with different sources of money.

Both projects could be done by November 2019, according to Brown.

KDG LLC, of Columbia, Missouri, now owns the Warden Plaza and is planning its future. Brown said he hopes to have a development agreement between the firm and the city government completed by July. He said that agreement would spell out schedules and funding sources. It will list what the city government will be expected to provide in the form of tax breaks and tax increment financing.

The agreement will also include what Brown called “clawback provisions” that would penalize the company if it doesn’t follow through on its commitments.

Jun 11 2017
TERRENCE DWYER People of all ages help a community thrive. A community’s long-term success, however, requires that there be an ample supply of young leaders moving into key leadership positions. With that in mind, the Greater Fort Dodge Growth Alliance, the Fort Dodge Young Professionals and The Messenger partnered in 2016 t...Continue Reading

Jun 6 2017
PETER KASPARI Market on Central will kick off its season Thursday with its inaugural event, which, for the first time, is being held at night. It will be from 4 p.m. to 8 p.m. The market, which has been around since 2011, is usually held the second and fourth Saturday each month fro...Continue Reading

New playscape at Kennedy Park is ready for action

Jun 6 2017
CHAD THOMPSON The natural playscape at John F. Kennedy Memorial Park is ready for action. Friends of Webster County Conservation were putting the finishing touches on the new playground Monday afternoon as about 30 people gathered for a ribbon-cutting ceremony. The ribbon-cutting signaled the beginning of a new opportunity for kids to connec...Continue Reading